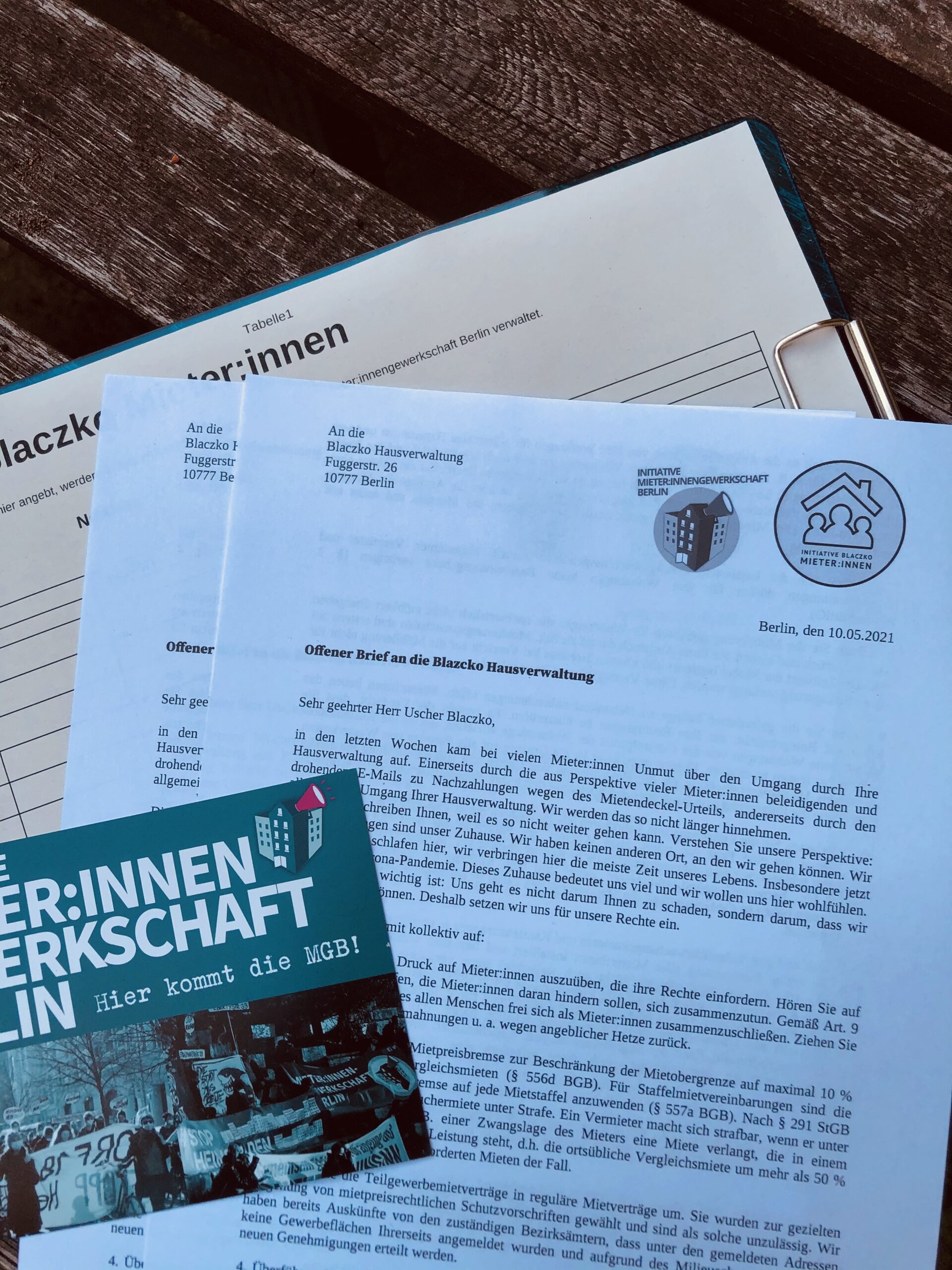 Organizing and network of tenants of Blaczko houses

Who is Blaczko property management?

After the Berlin rent cap was overturned and the Blaczko property management reacted with spiteful emails to its tenants, they have organised themselves in 22 known houses. The newly founded “Initiative Blaczko Mieter:innen” (Blaczko Tenants’ Initiative) has uncovered many more deficiencies and minor and major injustices, which they are now taking action against with the support of the Berlin Tenants’ Union.

The Blaczko tenants’ initiative is a network of tenants of Blaczko Hausverwaltung Berlin, which, according to current information, owns and manages 22 apartment buildings in Kreuzberg, Neukölln, Wedding and Wilmersdorf. The networking was triggered by a very rude e-mail from Blaczko to all those tenants who had demanded the rent cap. The email did not begin, as one would normally expect, with a greeting, but with the words “too soon rejoiced”. It was a gloating counter to weeks of efforts by the tenants to get Blaczko to comply with the obligation to provide information according to § 6 paragraph 4 of the MietenWoG Bln, which was in force at the time. As if that were not enough expression of their gloating, the emails were garnished with emojis and the request to find a new place to live as soon as possible, quoting “we don’t need tenants like that”.

We are talking about rents that are on average 50% above the rent index, 16-year graduated increases of up to 5.2%, one-off contract conclusion fees for self-managed property, flat-rate furnishing fees for non-existent furniture, inconsistent operating cost statements and more. Provided you have a master tenancy agreement. From the time the rent cap became known in June 2019, Blaczko got creative and took out part-commercial leases or subleases where the main tenant:s are employees of the property management company or members of the Blaczko family. As a first step, they have sent Blaczko a letter of demand, but so far there has been no response.

Since Blaczko took notice of our networking, harassment and intimidation attempts have increased. Where some are waiting in vain for repairs, others are harassed with unnecessary inspections. In addition, various tenants have received warnings for alleged agitation (for being part of this network) and confidential emails have been sent to tenants telling them that neighbour XY has blackened their name.

When tenants and activists of the MGB tried to contact other affected tenants on 19 May 2021 and invite them to a meeting of the initiative, they were confronted with massive intimidation attempts and house bans. Blaczko sent 25 security guards who did not let anyone from the tenants into the building. Tenants and activists were filmed and harassed, more details in the press release.

But we will not be intimidated and will continue to fight for tenants’ rights.

The aim of the initiative is to achieve lawful tenancy agreements in compliance with the Mietpreisbremse, the fulfilment of landlord obligations and a civislied tone. To this end, the initiative has sent a detaile letter of demands to Blaczko, which they now want to enforce with the support of the Berlin tenants union.