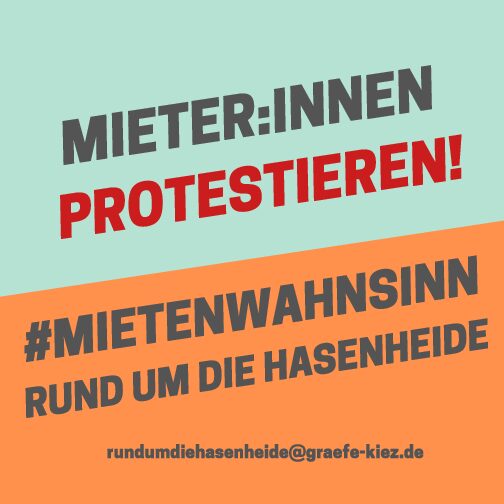 The new tenants’ initiative “RUND UM DIE HASENHEIDE” (“around Hasenheide”)(Berlin-Kreuzberg/Neukölln) will be publicly constituted on Friday, 2 July, at 4:30 pm. The tenants will gather at Südstern for a joint protest picnic against rising rents, displacement and real estate speculation and for the preservation of the neighbourhood structure.

Houses sold to investors, conversion into property flats, speculative vacancies, loft conversions, luxury refurbishment, rising rents, displacement – Hasenheide has become a speculative area and is visibly changing. But for a few months now, the residents have been resisting. “We are happy that our rallies and the protest action with the artists’ collective Reflektor Neukölln in April were so well received by both the neighbourhood and Berlin’s local politicians,” says co-organiser Anaïs Rodríguez. “Now it is important that tenants network and support each other, scandalise grievances and put pressure on politicians.”

This is the goal of the new action network “RUND UM DIE HASENHEIDE”. Tenants from houses in Hasenheide, Gneisenaustraße and Solmsstraße are involved. They are supported by the GWA Graefe-Kiez (community work), the Berlin tenants’ union, the citizens’ cooperative Südstern and the district initiative “Wem gehört Kreuzberg”.

Text, photo and TV editors are cordially invited to report!

The meeting will start at 4:30 pm at Südstern with speeches and colourful protest posters. Afterwards, all participants will have a picnic and prepare for further actions.

Attached is a leaflet with details about the buyouts of the different houses in Hasenheide. We will be happy to send you newspaper articles that have appeared so far on request.

If you have any further questions, please do not hesitate to contact us: